CLICK HERE TO READ A Nixie In the Mist,
A prequel SHORT STORY,
FREE WHEN YOU SUBSCRIBE TO MY
URBAN FANTASY NEWSLETTER

The magnetic poles have shifted. Powers ignite in their veins. But are their emerging Unhidden talents strong enough to defend them from annihilation?

Anna Taylor is barely holding her anxiety at bay. With scales growing on her body and shocking magic now at her command, the teacher flees after being outed by a student and attacked by an angry mob. And after arriving at a safehouse on a farm in Ireland for training and protection, she feels unprepared for her first mission to neutralize an explosive threat.

Vietnam vet Maximilian Hurley subdues his demons with drink. So when an Unhidden agent comes to Australia to recruit him, and a fire mysteriously destroys his plane, the troubled pilot doesn’t have much to lose. Teaming up with Anna, the tough-talking Aussie battles through his PTSD as they save Cork from a devastating bombing.

As the group of talents grows to a core crew of six, Anna and Max discover there’s little peace as a coalition of xenophobic extremists rises against those with Unhidden Blood. And now their combined powers might be the only thing standing in the way of their total extermination…

Can Anna, Max, and the squad stem a tsunami of chaos and death?

Taming of the Few is the first book in the Guardians of PHAE Irish urban fantasy series. If you like snarky banter, spectacular world-building, and nail-biting tension, then you’ll love Christy Nicholas’ urban fantasy adventure.

Buy Taming of the Few to defend a powerful destiny today! 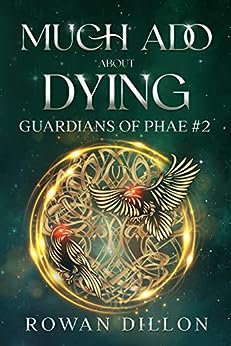 She needs ancient magic to prevent more deaths. But messing with the gods could get them all killed.

Galway, Ireland. Róisín is desperate to help badly burned bomb victims. But to her horror, the gifted healer discovers the explosions have also spread two deadly plagues. Searching for answers as to why five age-old magically linked sites are immune, she forges a risky connection with a powerful ancient deity.

With the god’s formidable energies almost destroying her, Róisín fights to expel him and strikes a deal. But her mission to save everyone hits another lethal hurdle when she comes under attack from extremists intent on seeing all of her Unhidden kind extinct…

Will Róisín’s perilous covenant plunge them all into darkness?

Much Ado About Dying is the epic second book in the Guardians of PHAE Irish urban fantasy series. If you like strong heroines, mighty deities, and ensemble casts, then you’ll love Rowan Dillon’s high-octane tale.

Buy Much Ado About Dying to banish the blight today! 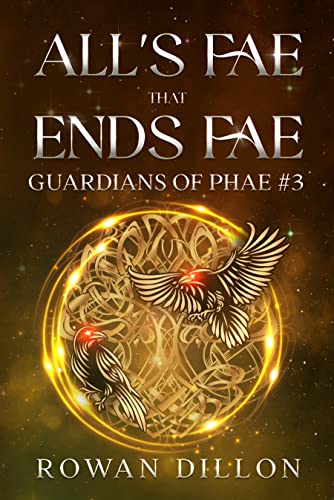 Her world is grim. Her allies are divided. Can she be the voice of peace and prevent their utter annihilation?

Bintou Sissoko misses the quiet life of ancient texts. But as the new spokesperson for one of the deadly old gods, the master translator accepts the importance of her skills. So she’s appalled when all the men are mesmerized by a beautiful and fiery goddess making a lethal play for power.

With her warnings falling on deaf ears, Bintou doubles down on researching and cataloging the true intentions of the newly risen deities. But unless she and her kind can work in tandem with their fiercest enemies, humanity could fall to its doom.

Can she help her people put their differences aside in the name of survival?

All’s Fae That Ends Fae is the whirlwind third book in the Guardians of PHAE Irish urban fantasy series. If you like sweeping action, war-torn factions, and gritty worlds, then you’ll love Rowan Dillon’s last stand.